This history is based on a series of interviews conducted with the women who coordinated Women In Motion over the years, it combines their reminiscences with the documentation still held by Women in Film and Television (Victoria), the AFI Research and Information Centre, and some of the personal files of the women interviewed.

I believe that as an outsider looking in upon, and back at, WIFT(Vic) and Women In Motion it is my job not to completely rewrite the past but to help others hear the people who participated in it tell their story. 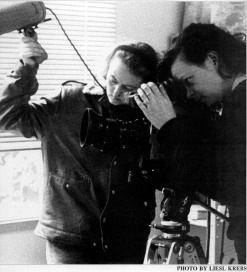 There are many people without whom this history would not have been possible.

First, thanks must go to Lisa French for her help in finding placements suitable for a historian interested in the field of film and television.

I must also thank Chris Tomkins for his endless patience in introducing me to the world of html and web-design.

And last, but certainly not least, this history could not have been written without the generous support of Rita Cattoni, Marsha Emerman, Sue Maslin, and Susan Miller for allowing me to interview them.

A history of Women in Motion – start here

This site was originally researched, written and designed as part of my Master of Arts. It was a history of an annual event held by the professional networking group Women in Film & Television Victoria (WIFT Vic). Previously housed on the Australian Film Institute’s (AFI) library website it is now housed here, as part of my larger screened history project. There is always the temptation, when revisiting past projects, to ‘fix’ and ‘fiddle’ with the original; but I’m a historian, so my aim is to let the past be the past – as much as is possible.